If you caught NBC’s “The Today Show” earlier this week, you may have seen a familiar industry face in a slightly unfamiliar setting. That’s because Nick Aust, son of PMP Contributor Stuart Aust and a merger and acquisitions specialist for The Aust Group, Upper Saddle River, N.J., was interviewed alongside his bride, Zoe Aust. The pair were married in December 2017, and spent January through October 2018 traveling to more than 33 countries worldwide. 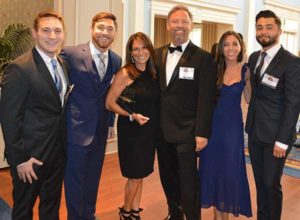 The Aust family at the 2018 PMP Hall of Fame induction ceremony. Pictured at right are Zoe and Nick. PHOTO: Diane Sofranec

As the blurb introducing the video clip explains, “Nick and Zoe Aust thought of a way to recreate their picture-perfect wedding moment over and over again by traveling around the globe in their wedding-day attire – and documenting all of it on Instagram. The newlyweds talk on TODAY about their journey.”

The journey made news worldwide, too, from hometown newspaper the Hackensack (N.J.) Daily Voice to British newspaper The Daily Mail. According to the article appearing in the latter outlet, the pair’s travels included:

“Life is too short to wear your wedding dress once,” Zoe, 27, is frequently quoted as saying (she also notes that she is impressed that the dress held up through all the travel). She and Nick, 24, quit their respective jobs and used their life savings for the adventure. They hope to inspire other couples to work hard, but chase their dreams and see what the world has to offer, too.

Today, Stuart Aust assures PMP that Nick is back at The Aust Group, ready to help clients. The staff at PMP wishes nothing but the best for Nick and Zoe, whose adventures are documented on their blog, Marry Me In.

from Pest Management Professional https://www.mypmp.net/2019/02/21/the-austs-celebrate-romance-worldwide/
Sacramento CA
Posted by Mold Atlanta at 8:25 AM